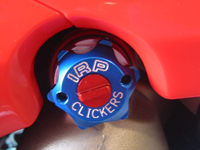 The clickers actually "click" slightly when you turn them. They click so that you can more accurately adjust them. They are usually set from "clicks out from seated". This means that you turn the adjuster IN, while counting the number of "clicks", until the the adjuster seats LIGHTLY! This would be the clicker position, or the "clicks out".
If your adjuster is set at 10 clicks out, then 8 clicks out would be stiffer, and 12 clicks out would be softer.
Some adjusters don't "click", but they function exactly the same. This adjuster's position would be counted in "1/4 turn increments out from lightly seated".

Contrary to popular belief, in order to adjust the suspension's "high speed impact" characteristics (like bottoming in the whoops), internal valving modifications are required,
NOT A CLICKER ADJUSTMENT.